If you had told me eight years ago, that I would be writing this post about my first feature documentary (that somehow managed to make its way onto one of the largest streaming platforms in the world) I would probably have laughed.

I’ve worked hard since graduating in 2012, but I’ll be the first to admit that nothing I worked on directly gave me the credentials to self-shoot, direct and co-produce a feature-length documentary about Britain’s most successful sportsman (arguably).

This post, I hope, will bring comfort to those who believe that you don’t have to follow a traditional work model or play by the rules to get you where you want to be.

To begin, I didn’t even like tennis. Correction: I didn’t even understand the rules of tennis when I first met Andy – Sir Andy Murray! Andy is the husband of my boyfriend’s sister, but my lack of tennis knowledge meant that I added absolutely no value when dinner conversations turned to ‘The Tour’. How could I? I had no idea the tennis season lasted for more than the two weeks of Wimbledon and a bit in America later in the summer.

Luckily for me, the conversations never lasted long enough for me to try and participate; like most families who have had a glass of wine or two, the chat would always turn to politics. Now, this was where I really thought I could try and redeem myself. I just so happened to have launched a social and political video blog ahead of the 2015 General Elections, here in the UK. I was by no means an authority, but I thought I knew enough to have an opinion.

To cut a long story short, the blog failed miserably, but only in our choice of topic. The company – Scenes of Reason – knew how to quickly churn out spirited video content, but we were competing with the rest of the world who also thought digitising news in a video format was a good idea! We pivoted and started calling ourselves an “Indie Production House” because you can embellish things like that, and we knew how to hold a camera.

The next line should read “…and the work just came rolling in,” but it didn’t. The company was making absolutely no money but we were churning out video – quite good video – so a portfolio started to emerge.

My boyfriend Scott, two years into our relationship, had a crazy idea to try and break the world record and become the youngest person to walk to the South Pole unsupported and unassisted. Without ever thinking it would actually go ahead (shame on me), we decided to try and get the ball rolling and made a promotional video for the expedition in an effort to recruit sponsors. I have to say it still holds a lot of sentimental value in my mind – it was punchy, and seemed to capture people’s attention. Music for me comes first with an edit, and this track by A Tribe Called Red defines the promo:

While Scott was busy (successfully!) completing his expedition, I was spending an increasing amount of time with his family. Sadly, Andy, who was number one in the world at the time, was around a bit more than usual because of a hip problem that just wasn’t dissipating. Little did everyone know that his decision to undergo surgery in January 2018 would be the start of an epic two-year battle, one that I would end up capturing from the front lines.

Inspiration for the project...

…did not exist. In January of 2018, Andy thought that it would be interesting for his fans to understand what it takes for a top athlete to undergo surgery and return to action. The timeline he’d been given to rehab and recover was approximately six months, just in time for Wimbledon. When you’re around Andy Murray, anything is possible. Andy will make it possible. So when Andy and his wife Kim asked if I’d be interested in documenting this journey, I jumped at the opportunity to have stability for half a year.

The sense of responsibility in having to film, record audio, direct and produce this “mini” project, that I figured would just end up on Youtube or Facebook, didn’t dawn on me at first. I was completely up for it. I bought a new camera, one that I had never used before, my DOP friend came over to teach me how to use it for a day, I did my own research about audio equipment, and that was that. The contents of my kit bag became my best friend, so much so it became a running joke in Andy’s team that no one was allowed to touch it; this kit was going to become the most valuable thing I owned.

When it became a film

Approximately four months into filming, and when I say filming, I mean filming every day, every movement, every meeting, every minute of Andy’s meticulous(-ly boring) rehab routine, we hit a bump in the road. Andy was not recovering as he should. I say “we” because when you spend that much time with a team so determined by their goals, it is hard for that goal not to become yours as well.

It was at this four-month mark that I began to see what this sport truly meant to Andy. This game was the essence of Andy’s very existence. Everything it meant to him, and the emotion attached, began to surface. It was at this very moment that this “Surgery to Serve” – or whatever tennis-pun title was bound to be attached to this project – became a film. A film that now had a sound, a heartbeat, a sense of humanity and an ending no-one could expect.

Sound for me is the most important part of any film, music unleashes imagination in all of us; it can mediate moods in a way that feels like wizardry. Believe it or not, I had actually been sourcing music from licensing platforms such as Music Vine even before I started filming. Several of these tracks eventually made it into the final cut. In fact, in order to hire a producer, I edited a ten-minute sequence, and, to this day, I believe the two tracks I used in the sequence landed me the opportunity to work with Oscar-winning big dog John Battsek. One of these tracks, ‘Bernie’s Army’ by Ben McElroy, was licensed from Music Vine.

Sadly, even now, the sound of the film is not quite what I wanted it to be, but there was just never enough time. If you listen closely though, you’ll notice that Andy’s pain has its own sound, it’s subtle but it’s there, and the reoccurrence of some tracks are purposeful. You can take people on a journey in 90 minutes or 10 with your choice of sound alone and one of my biggest regrets is not allowing myself more time to explore the film’s sound and music.

I’d love to sit here and tell you that my greatest challenge was trying to figure out how to charm the pants off Rafael Nadal, getting him to tell me how he really feels about his opponents and the sport as a whole, and that now I am known as the documentary whisperer – not quite.

My biggest challenge was that I didn’t take myself seriously as a documentary filmmaker. I’m not sure I still do, even now. Quite often I had to force myself through each day and try to look beyond all the things that could go wrong. It is absolutely not normal for one person to be able to watch the battery life on both the camera and audio equipment, as well as their memory card capacities, whilst also looking my subjects in the eye and engaging wholeheartedly in what they are enduring so that they will allow you to come back and do it all over again the next day.

The problem with that mindset is that it is exhausting – who actually cares how you identify yourself. Looking back now I still don’t know how I pulled it off. I actually did mess up a fair bit and I’m not sure I was all that professional at times but, if I had to take a punt, I’d say the only reason I managed to get to the end is because of the relationships I built with every single member of Andy’s team and the post-production team.

I felt confident enough to always keep going. I felt supported enough to know that with every problem there was a solution because I never promised anything I couldn’t deliver. I openly questioned the consequence of every decision, and I prioritised my personal relationships with the people I was surrounded by over the film. After all, they were the film.

A story worth buying

Being an unknown, or “outsider” as I was once referred to, I had the luxury of creative freedom all the way through post-production. By that I mean, this film wasn’t viewed as legitimate-for-purchase until it was finished. Of course, various people had to sign-off the film before it was released, but I never had the additional stress of the buyers in the room, and for that I am eternally grateful. I knew that Amazon and other streaming services were aware of the film I was making.  Of course they were interested – it is about Britain’s greatest sportsman after all, but they needed to see it before signing the digital cheque.

There isn’t much more to the story;  the film was a great fit for Amazon. They had just purchased all the live tennis streaming rights, and this film was the perfect contribution to their platform. I can’t say I was involved too much in the fine details, but it certainly made the most sense at the time. Would I have selfishly loved the opportunity to showcase the film in cinemas as a limited theatrical release? Yes. Should I shut up and be grateful that my debut feature has been viewed worldwide on one of the biggest streaming platforms? Also yes.

That’s the funny thing about getting an opportunity you never could have dreamed of, it leaves you wanting more. The hope is that my next project will come sooner and faster. There is no guarantee of that, but let me tell you that the fight is the most enjoyable part.

If I were to do it all again:

P.S I still don’t know very much about cameras. 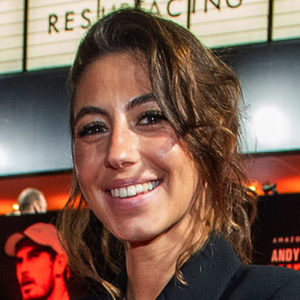 Olivia Cappuccini is a Director and Filmmaker from London, UK. Olivia is the founder of Scenes of Reason, which was formerly a social and political news outlet before pivoting into an indie production house. SoR now specialises in short and long form documentaries.