The last few years have seen an unprecedented surge in user-generated content. It feels like everyone has become a filmmaker. Long-form video is thriving on platforms like YouTube as creators can authentically interact with their audiences and build highly-engaged communities. Elsewhere, short-form video platforms like TikTok and Snapchat are giving millions of people their five minutes of fame.

The lines of traditional media have been blurred, content is being produced faster than ever before, and understanding the subtle complexities of what people are consuming – especially young people – can feel incredibly daunting. But, there is hope. In this article, I aim to help you understand how to create great content for young people so it doesn’t feel like you’re throwing content into the void.

So what makes young people different to other audiences? New research from Ofcom, the UK’s communications regulator, reveals that fewer young people are sitting down and watching conventional television. One reason why is the lack of choice in programming.

“I don’t really like the TV because you can’t pick what channels are on it.”

The popularity of YouTube and the rising percentage of smartphone ownership among young people has led to a more independent audience that’s used to choosing what they watch. It’s leading them to interact with a wider variety of content, formats and genres that have never previously seen the light of day.

With this new age of content consumption, and the opportunity to put your content at the fingertips of audiences that were previously unreachable, filmmakers shouldn’t be daunted by the different, exciting ways to branch out from traditional filmmaking.

Getting seen on this new stage

When young people are rewriting the rules behind traditional filmmaking, how do you make your films stand out? There’s no simple formula that’ll make your content hit the mark every time. But, with more opportunities to speak to people, there’s less pressure for your content to be perfect every time.

With short form, the opportunity to take risks is elevated. The content you’re creating doesn’t need to be a super-polished Super Bowl ad that stands out in a hypercompetitive space, it can be more nuanced.

Only a single video has to go viral for a campaign to gain huge traction, which means that brands and filmmakers have more freedom to test the water with content and themes that may normally be out of their comfort zone.

For example, brands like Allianz have resonated with a younger audience by inspiring change on subjects such as climate change and environmental issues.

While there may not be a one-size-fits-all formula for short-form video, from my experience there are three key criteria that can boost your chances of getting young people to watch and share your content.

The ingredients of a viral video

Almost all of the viral short form videos that have created a stir and had an impact across the world have utilised three key things.

Shareability of content is one of the most important steps on the path to virality.

But spotting the difference between a clip that gets seen by just your friends and a clip that sweeps the world can be hard.

When sharing a video, the sharer wants to say something about themselves. It could be that they want to show:

By hitting one of these points, a video is likely to be shared far and wide, whether that’s on the Facebook timeline or being sent to the group chat on Snapchat; viral videos almost always have one of these three elements.

A hook and a great ending is often the secret to getting seen.

On TikTok, for example, user retention statistics show that people make their mind up on a video within just five seconds. They either watch it almost all the way through, or swipe to something new. That’s why it’s crucial that videos have a great hook and establish their premise very early on.

As for the ending, that can be the difference between someone swiping away, or liking and sharing. An ending that says something, or subverts expectations, can be the make or break difference maker in short form content, and can create a viral video in itself.

As with all filmmaking, a good story will always get attention.

In what may be the first comforting thing that I have said in this whole article, it is still true that people watch films for the stories. Whether it is a one minute TikTok, a five minute Facebook video, or even a YouTube ad, young people will always keep watching if the story keeps them hooked.

Great characters and a great story will always give your film an edge. But, creating great content that people and communities want to share and talk about can help your film leave an impact on the world.

But what do they even want to watch?

A better question might be, what don’t they want to watch? With the world’s content at their fingertips, young people have a more diverse palette than their parents, and perhaps any other generation before them. It means they’re open to watching content of all kinds, which is great news for filmmakers.

One of the keys to making sure your short form video stands out above the others is that you are fishing where the fish are. Creating a film and leaving it to rot in a dark corner of YouTube is a shot in the foot for something that you’ve poured your heart and soul into.

There are so many platforms out there with millions of young people dying to hear new stories. If your one minute short documentary only gets ten views on YouTube, maybe it would resonate with the people of TikTok. Perhaps a Facebook video could help you reach new audiences, or a Snapchat channel could help your voice get heard.

However, there is one golden rule to creation of content, that applies to everything from reality TV to documentaries. Authenticity. One thing that young people are incredible at is sniffing out the hand of a producer or noticing when someone is acting up.

Creating content that you truly have your heart in, telling stories that really mean the world to you, and producing films that you believe can make an impact, will be infinitely more appealing to audiences than a branded short that you don’t care about.

Be honest, be true to who you are and tell stories that take a little bit of your heart with them.

This may sound ridiculous, but the real key to creating content for young people is that you don’t treat them like young people.

Explicit, educational, and downright disturbing viral videos are on their feeds all day, every day. Plus, they have to constantly maintain their personal brand with the eyes of the world looking down on them.

Young people want to watch and share content that treats them with the maturity they deserve. They want to see honest stories that will make them laugh, cry or think about the wider world around them.

Know yourself, know your story, and be direct and genuine. Remember that in this age, everything, everywhere, changes all the time. Be brave, experiment, take risks, and be a part of the huge wave of new content engaging young people all over the world. 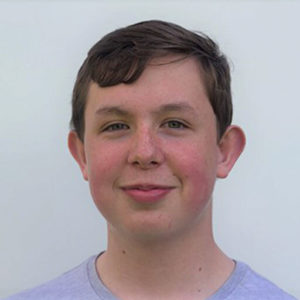 Billy Arthur is an eighteen-year-old documentary filmmaker based in England. He has worked on short-form factual and fictional content, for digital and broadcast, and recently directed a BAFTA-nominated documentary for the BBC.